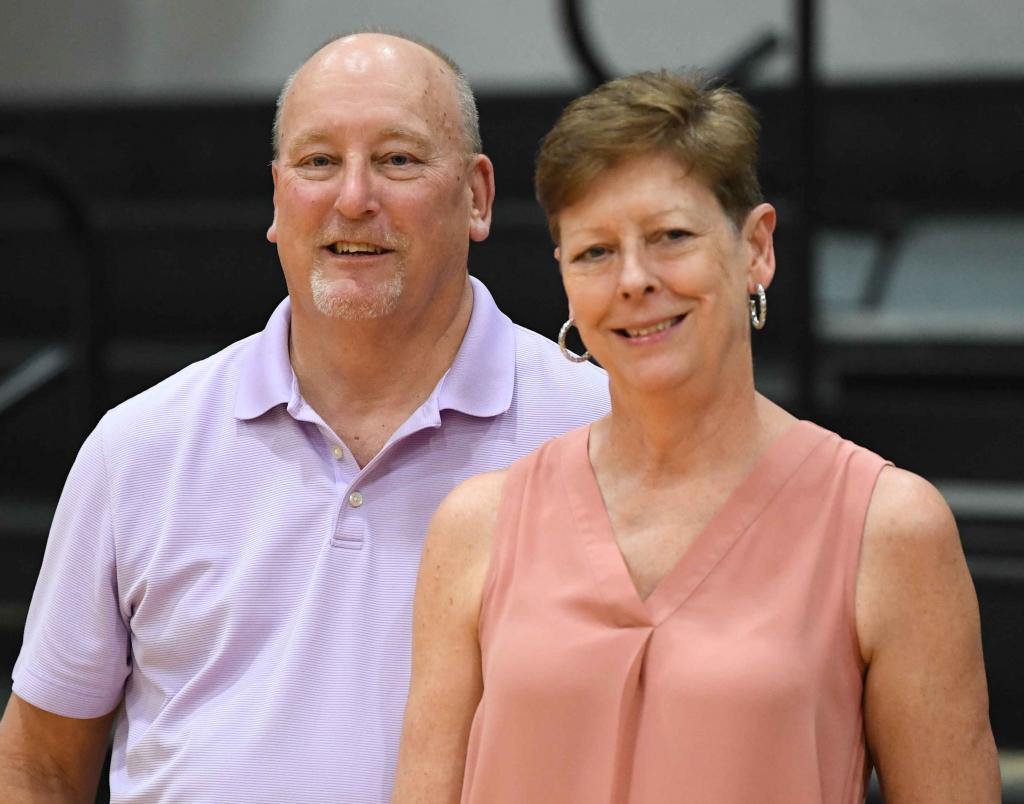 Jerry Metzler was honored as a Hometown Hero on May 10, 2022. Here is the text that was read at the ceremony:

Jerry Metzler was born in 1956 in Gainesville, Texas, the second child of Gerald and Verena Henscheid Metzler. He has two brothers, Mark and Roy, and a baby sister Debbie Voth.  In 1976, he was lucky enough to marry Glenna Hellman and they have three daughters, Christina Fisher, Stephanie Noel, and Allison Metzler.  They also have a son-in-law Christopher Noel and two granddaughters- Madelyn  and Chloe Noel.  Jerry lived in Gainesville until his family moved to a farm north of Lindsay in 1963. Jerry vividly remembers riding on a hay trailer with family belongings during the move, serving as dead weight to keep things from blowing off.  The Metzler family lived a typical "Lindsay" life- school was important, but hard work and the Catholic faith were the core beliefs. In seventh grade, he began working at the family barbecue place and was an underpaid employee until he graduated from college.

After graduating from North Texas State University in 1977, Jerry became a teacher and had the privilege to work in several schools. Mr. Metzler earned a graduate degree and became a school administrator in 1981.  Eventually he served as a Dean at North Central Texas College and then returned to public education as the Principal of Lindsay schools in 2000. In 2003, Mr. Metzler became the LISD Superintendent.  He worked with many great educators, students, and parents at Lindsay and he was fortunate to be the superintendent when, due to the efforts of a large number of community members over a period of years, a bond issue was passed and this gymnasium was built.

Over the years, Jerry has been involved in many community organizations; though he notes that he has not been elected to anything since he ran for LHS Student Council President in 1973.  He has been a member of area Kiwanis Clubs and served as a United Way Director and Allocation Committee member. Mr. Metzler was appointed twice to serve on the Gainesville Hospital Board and was on the Gainesville State School Community Advisory Board for several years. Jerry served as member of the Lindsay Planning and Zoning Commission for a total of eight years and he is a member of the LISD Site-Based Committee.  Court Appointed Special Advocates has been a big part of Jerry's post retirement years; he was Volunteer Recruiter and trainer for five years and is in his ninth year as a CASA Volunteer. Active in St. Peter’s Parish, Jerry was an altar boy and is currently in his fifth decade as a lector.  He is currently in his second stint on the Parish Finance Council.  A member of the Knights of Columbus for over 35 years, Jerry was a long time officer and served a term as Grand Knight for Lindsay Council #11905.  These activities have kept him busy since he officially retired from the school business. However, Jerry is very proud that he also found time to learn to country and western dance about ten years ago and he and Glenna like to "cut the rug" on occasion.

Mr. Metzler knows he is fortunate to have a supportive family and he particularly wants to thank Glenna for taking care of the home front all these years. Also, Jerry would like to express his appreciation to LISD for this honor.  He has had the privilege to know each of the previous "Hometown Heroes" and he is humbled to be included in this group.  Lindsay is a community built around many good people and he feels lucky to have spent most of his life in such a wonderful place.

We have photos of the ceremony here.