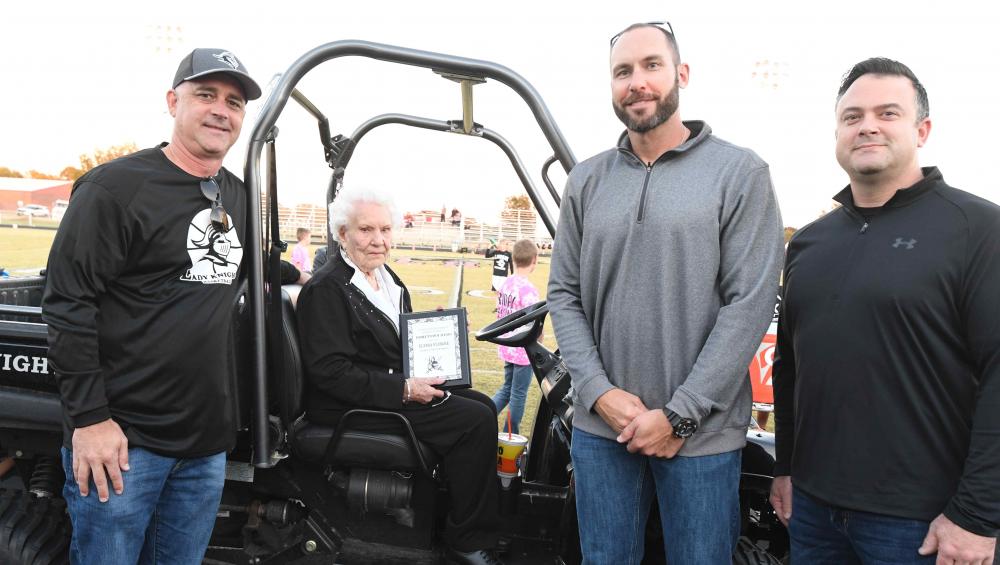 Three times throughout the year, the Lindsay ISD Board of Trustees selects a person who, through his/her efforts has brought a shining light to the Lindsay community.  We recognize each recipient as being our Hometown Hero!  We are proud to acknowledge the most recent recipient, Mrs. Elvira Flusche!

The first Catholic mass in the Lindsay colony was held in Wilhelm’s home on March 25, 1892.

Bill and Elvira resided on the Flusche farm northwest of Lindsay almost all of their married life.  Elvira spent the early years of their marriage helping with field work and raising a family.  She enjoyed working in the flower garden and cooking, baking and sewing for her family and friends.

She also kept busy as an adult leader for the 4-H Club, with her children and grandchildren as members.

She was active in St. Peter’s Parish serving as a Eucharist Minister, active in the St. Anne’s Society and spent many years visiting the local nursing homes.

When her children were grown, she went to work outside the home.  For 14 years, she enjoyed working as a cook in the snack bar at Cooke County College…currently North Central Texas College.

In a recent interview with her Granddaughter, Debbie Sharp, Ms. Flusche shared when she was born she weighed only 2 and 1/2 lbs.  Her mother placed hot bricks and water bottles around to keep her warm – creating a type of incubator.

When Camp Howe was being built she leased out a room in their home for the workers to sleep – 4 workers would sleep during the day and 4 would sleep at night.  She would wash the sheets, pack their lunches and get ready for the next group.

The family raised cotton, wheat and oats on the family farm. When Imogene and Bill were little she would put the baby on a cotton sack and pull them around as she picked cotton.

When she was a child, her family would go to church each week by horse and buggy. Their first car was a Model T. She remembers doing laundry on a rubbing board. She lived the first 19 years of her life without electricity. Coincidently, she was very excited when they got their first electric washer, dryer and even a dishwasher.

When ask about her secret to a long and fulfilling life – she responds…..her faith and her family.

We are thankful for Mrs. Flusche and for all she has done for Lindsay.  We are proud to call her our Hometown Hero!