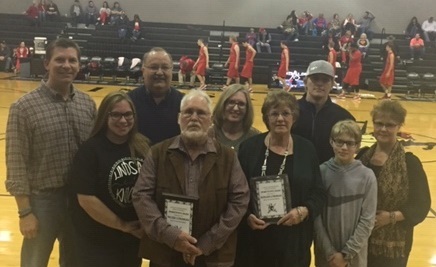 Walter was the oldest of 6 children born to August J. and Armella (Flusche) Lutkenhaus on November 14, 1945, in Muenster, Texas. He attended Sacred Heart School and Muenster Public School, graduating from MISD in 1963.

Kathleen was the first of 4 daughters born to Lawrence and Olivia (Dulock) Streng on October 25, 1946, in Gainesville, Texas. She attended St. Mary’s School and, after the family moved to Lindsay in 1961, Kathleen entered Lindsay’s High School, graduating in 1965.

Walter and Kathleen met at a Valentines Dance at the Lindsay Gun Club in 1964 and became engaged at Christmas 1965. Walter had already received his Draft Notice… so, on January 24, 1966, he reported for duty with the US Army. After completion of basic training at Fort Polk, LA, he was assigned to the 1st Battalion 40th Artillery at Fort Sill, OK… then shipping out to Vietnam. His unit was based at Dong Ha… just south of the DMZ. When returning from Vietnam, he was again sent to Fort Sill with the 1st Training Brigade. After Walter was discharged from the Army in January 1968, Walter and Kathleen were married on April 20, 1968, at St. Peter’s Church.

Walter had returned to his job at Shamburger Lumber Co., was helping his dad on the farm and attending college at night. Kathleen was working at Jr. Elite Dress Factory. Soon Walter went to work at National Supply Co. (Armco Steel) and by October 1970 the family moved into a new home west of Lindsay. This is where their 4 children… Donna, Michael, Laura and George grew up.

Walter was employed at National Supply for 19 years, working as a receiving/shipping clerk and inventory specialist, until the plant closed in 1988. He worked various jobs for a short time… then was a Relief Route Carrier for the US Post Office and a truck driver for Paul J. and Gary Hess Trucking, until his retirement in 2007.

In the early years, Kathleen stayed busy with her family and home, cooking, sewing, gardening and catering for local weddings and anniversaries. Later she was employed by the US Postal Service, from October 1982, in Lindsay as Postmaster Relief, until 1994, when she started full time at LISD. She worked at the Lindsay school for 22 years, until retirement as Elementary Secretary, in May 2016. While at school, she especially was proud to decorate for the LISD Veterans Day program each year, to honor the area veterans.

Walter and Kathleen have always been active in their church, school and community. Walter took over the VFW flag route for Lindsay in 1980 and the job of setting the military crosses in St. Peter’s Cemetary (he had been helping his father-in-law since 1968). It has been 50 years of service, remembering our veterans, and he still continues today, with the help of family and several dedicated volunteers.

Beginning in 1982, Walter served on the Selective Service Board (draft board) for the next 20 years, at the request of Father Cletus Post - that someone represent our area young men if it again became necessary.

Walter is dedicated to those who have served their country. He is a life member of VFW Post 1922 in Gainesville. At this time, he works with Veterans Out Reach Programs, doing research for the veterans and their families.

Kathleen volunteered with the usual activities, as the children entered school. She also served as a 4-H leader and especially enjoyed cooking for the 4-H summer camps. She received recognition from the State Volunteer Leaders Accocation in 1990, at Texas A&M. She taught St. Peter’s CCD/First Communion classes from 1985 to 1999, served as President and Vice President of St. Anne’s Society, and was a member of the Centennial History Book Committee and Centennial Hall Committee.

Having sold their house west of town to their daughter Laura’s family in 2003, they built a new home in town, and now they follow the activies of their 6 grandchildren… Nicholas, Samantha and Joseph Fisher… George Jr., Andrew and Cooper Lutkenhaus… traveling to 1st 40th yearly Army reunions, camping and enjoying their free time at home.

We are grateful to be a part of a community where we know that our faith, family and freedom will continue to guide us.