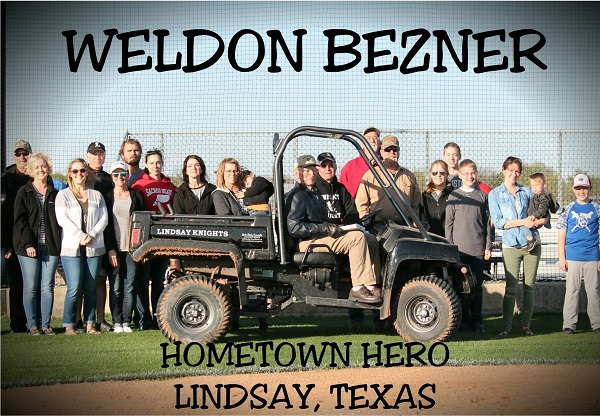 Born in 1929, Weldon William Bezner was the 6th of 9 children born to Jake and Elizabeth Wiese Bezner. He was the first in his family to be born in the “hospital” at a cost of $25. He went to LISD thru the 11th grade, graduating in 1946, and then attended Subiaco Academy, in Subiaco, Arkansas, for post high school studies in 1946-47.

Weldon came home to farm a few years with his family, before joining the Navy, as a Seabee, from 1951-1953 working in North Africa, running bulldozers building landing strips for the Air Force.

In 1953 Weldon returned home from the Navy, met Rose Marie Walterscheid, a sweetheart from Muenster, and on January, 26th of 1954 they were married at Sacred Heart Catholic Church in Muenster, by Father Alquin Kubis. Weldon and Rose have 7 children, Matt, Lisa, Sandra, Andy, Bruce, Dan, and Pat. Weldon has 14 grandchildren, and 7 great-grandchildren, and number 8 is due in July.

A farmer, rancher and businessman all of his life, Weldon provided many jobs for the local Lindsay boys with farming and hauling hay during the summer months. He also ran a feedlot operation with Weldon Sherrill in Hereford for a number of years, and provided cattle for Fishers Meat Mrkt. in Muenster from the late 60’s and into the early 80’s.

Weldon also partnered with Frank Haverkamp, and the Zimmerer brothers (Vincent, Henry, and Bruno), as co-owners of the Parkview Superette, the Bottle Shop and the Dutchman. These businesses provided many jobs for local high school students and others as well.

Active in the community, beginning as a student, working on Conrad Hall. Conrad was built with the brick that came from the old Camp Howze army camp buildings. The brick had to be cleaned, a chore that was done during their recess, once cleaned, it was then used for the building, I guess they did o.k., as the building still stands today.

Weldon served on the school board 12 years, seven of those as president, and spent countless hours donating his time and his shop equipment, for the purpose of building projects for the school and the town. The playground equipment at school, projects at the football field, weight room equipment, the original bridges in the park, swings, merry go round and countless other projects for the school and community were built by Weldon, Norb Mages, the Arendt brothers and others.

Weldon served on the parish council as a “warden”, as it was known back in the day, for 28 years, guiding the parish on restoration projects in and around the church, the Sister house, (now known as Providence House), the first gymnasium, the cafeteria, and the beautiful brick church parking lot, along with donating the beautiful archway east of Saint Peters Catholic Church that prominently displays Saint Isadore-patron Saint of farmers; and Saint Peregrine-patron St of cancer victims; memorial plaques on the North and South sides respectively.